I'm liveblogging from Coachella for Wired.com. I just put up my first post featuring some photos I shot last night of the staging and art. I'll be posting a few times a day for the duration of the show. Check it out: 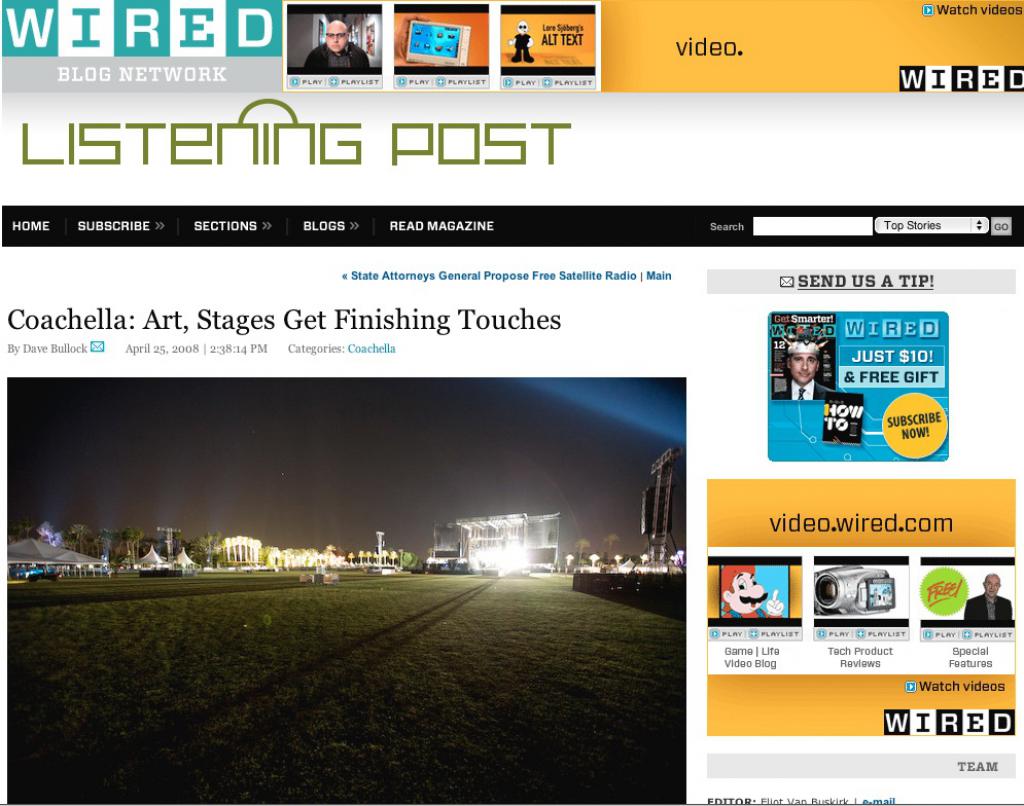 As I mentioned in the last few posts that I just posted in a spurt of posting activity, that I am building up a portable, battery powered lighting setup. I didn't feel like spending $3,000+ on a "real" head / pack lighting system as of yet, although some day I will end up buying one, most likely the Dyna-lite setup at first, but then eventually a Profoto rig. Portability is probably the biggest factor for me, as I don't have a studio to shoot in, so nearly all my work will be done on location. Many of the locations I plan on shooting will be either outdoors, or in places where lack of line voltage would be a limiting factor.

I already possessed a Quantum Turbo 2x2, which I've been very happy with in combination with my Canon Speedlite 580EX. I didn't want to buy another 580, because I didn't plan on using E-TTL for my portrait lighting, so after some research I decided to pick up the very moderately priced Sunkpak 120J Auto Pro, which is a bare bulb flash, that can be powered directly by an HV power pack, without needing any other batteries, unlike the 580EX.

Unfortunately Adorama sent me the TTL version of the 120J, which didn't come with the sync adapter, so I bought the standard shoe adapter that has the sync connector. This really isn't what I wanted as I will never actually be mounting it on a hot or cold flash shoe. I am trying to work it out with Adorama now, I need the flash for some work I have coming up, and they want me to buy the right one, even though it was their mistake in sending me the wrong one, and then send back the wrong unit when the new one comes. I feel like they should take the hit, send me the new one and I'll send them back the wrong when when I have received the correct model. I will see what happens, but I have a feeling that I am going to have to do it their way, which is too bad.

So as I wrote about earlier, I am using the 2 PocketWizard Plus II transceivers to trigger the flashes, which I am bouncing off or through a couple of convertible Photoflex umbrellas, that are sitting atop one Photoflex stand and one Avenger Stand. The third PW is on atop my camera in the hot shoe and I am using the Sekonic L-558R to meter the scenes. I also just picked up a couple of used C-Stands, and although they're heavy as hell, they're very sturdy and will be great to hold my convertible reflector and down the road flags, scrims, fingers, dots, etc. I also bought another Quantum battery, this one a Turbo Z. I have some sand bags and cases for the stands in the mail. In the future I will be buying some Chimera softboxes

My first results have come out quite well, but I still have a long way to go, and I am planning on taking some lighting classes, and maybe attending a workshop or two.

after setting up my secure snmp network i needed something to parse the data with. MRTG is too basic so i opted for rrg. I used the software package called cacti. It's very nice.