After three years of life changing organizational goodness, I migrated my plain-text-based GTD system to OmniFocus.

My text list system has not been the most efficient implementation. I decided it was time for a standalone application. After reading this GTD application comparison and watching a screencast about OmniFocus I decided to download the trial and give it a shot.

OmniFocus is a slick application. Thanks to its Cocoa goodness, it integrates perfectly with OS X. It has an easy-to-use interface, but its plethora of features takes some getting used to.

The hardest part was manually importing my several hundred tasks and projects. I had to copy and paste these one by one. It would be a nice feature if OmniFocus could parse plain text files and import each line as a task.

When I was using my text lists I didn't fully utilize contexts properly, but OmniFocus makes them easy to implement. You can switch to Context mode, select a context like "Office" and see all the tasks that can be done in your office.

OmniFocus has a nice feature called Perspectives, where you can save a predetermined view of your tasks. I have one which I use to implement Zen Habits MITs (Most Important Tasks). Every night before I go to bed I review my Next Actions perspective and flag the tasks I want to complete the next day. The MITs perspective shows my flagged items, which I then (in theory) do.

I also have the iPhone app installed. It's not cheap: $20, but it works fairly well apart from the syncing speed. It takes a very long time (5-10 minutes) to sync changes over the EDGE network, which basically make it close to useless for quick entry. If I know I'm going to be using is I can let it sync for a few minutes.

OmniFocus is supposed to sync to a WebDAV server, but it fails on my FreeBSD server running Apache 2.2.3. I am forced to sync using Apple's buggy Mobile Me. I hope they fix the WebDAV sync issues before my Mobile Me free trial runs out!

Despite the imperfections and relatively high price, I really like OmniFocus. As soon as they fix the syncing (or they stop extending the free trial) I will be purchasing a license. 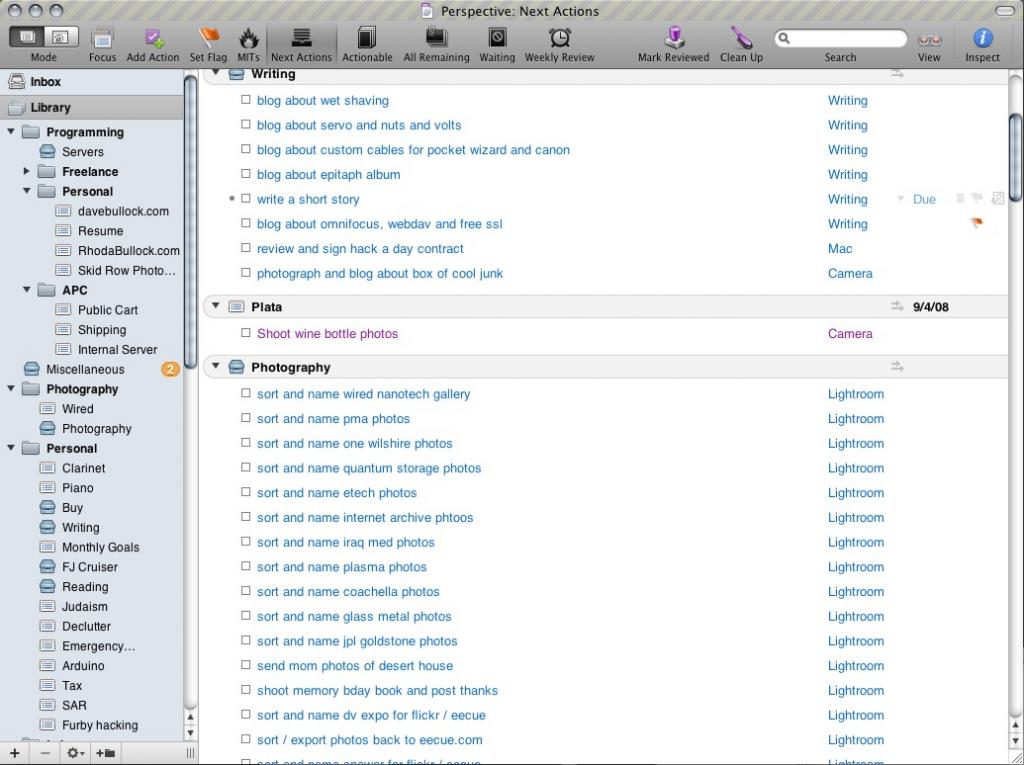 Getting Things Done and How It Changed My Life

Getting Things Done (GTD) literally changed my life 3 years ago. Growing up I had always been highly unorganized. After reading about GTD on the internet I ordered the book by David Allen and instantly started to change the way I worked.

GTD offers a pretty simple theory for organization: Collect every task and action you have in one trusted place. Instead of the dozens of lists I had spread throughout my computer for various projects, I funneled them all into several lists in one place. I collected every little nagging task my head and put them in those same lists.

Having all my actions in one place allowed me to easily keep track and review what I had to do. This simple change completely altered the way that I worked. I am now extremely productive and I love it.

A few weeks ago I reread GTD and implemented a number of things I had not done before. I created an orderly physical filing system for all my important papers. When I first started using GTD I tricked myself into thinking that I did everything on my computer. Once my filing system was setup I saw that was hardly the truth.

After creating my filing system I set up what David Allen calls a tickler file. A tickler file is a series of 43 folders, one for each month and 31 for each possible day of the month. When I have a physical item that requires my future attention I put it into either the month folder that it pertains to or the day if it happens to be in within the next 30 days. Every morning I check my tickler file to see if any paperwork is waiting for me.

Getting Things Done has change my life for the better. There is no way I could have accomplished what I have in the last 3 years without it. Thanks to GTD, I can finally say I truly am organized. Being organized is awesome. 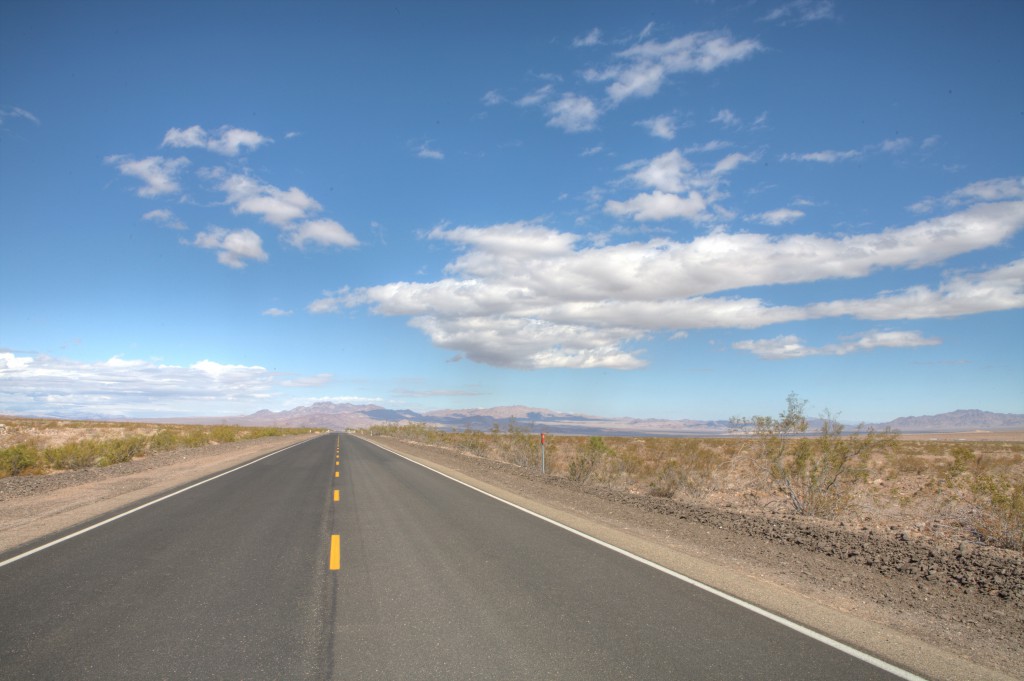 Route 66 stretches out into the desert near Ludlow in this photo I took after a Desert Explorers Rendezvous in 2007.

I just got in to GTD last week, my book hasn't even arrived yet via Amazon but I have read dozens of web pages about the process and I have my @action lists / projects / goals etc and it works great... put a whole bunch of tasks in to my dead and done file so far in the last few days.

My next step is to create a nice php/mysql interface that will sync with the text lists on my home/work desktops and my blackberry (which is on its way). So far I am using a combination of tar, openssl and scp to keep my lists synced, archived and encrypted. Fun stuff!