On Friday night a text message came in informing me that our scheduled training / certification was on hold due to a search call-out. I headed out to San Bernardino to the Sheriff's Office / Jail where we store our team gear. We camped on the floor of the SO's conference room and headed up to Mount Baldy at 4:30 AM. 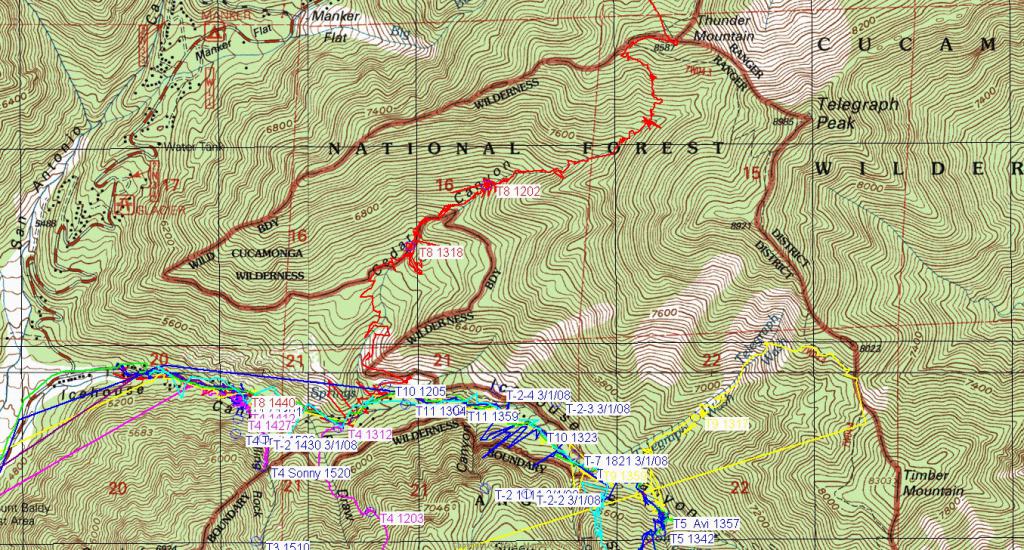 At around 6:00 AM we were given our assignments. I was assigned team leader for the first time. Our assignment involved riding up the chair lifts to the top of the Mt. Baldy ski area and then hiking down through Cedar Canyon to the Icehouse Canyon Trail [see the red track in the image above].

For the first half of the hike down we wore our crampons due to the slippery (although not treacherous) conditions. For the second half of our mission we walked on south facing scree slopes and boulder fields that had only small patches of snow covering them.

It was a good hike, although our roughly 50 pound packs made the trip physically taxing. When we finally hit an actual trail instead of just hiking through a drainage, it was a welcome relief. Unfortunately our team didn't find the subject. According to this article his body was found by two hikers.

I'm going to bed as soon as I am done typing this because I am waking up around 4:00 am tomorrow to go search for a missing Danish hiker in the snow on San Jacinto. I am looking forward to this mission and to getting out in the snow. The tram ride is always fun, too. I'll take some pictures with my SD550 so you can see how it went.

A Busy Search and Rescue Weekend

This weekend our SAR team had a two part training scheduled. The first part was Helitac training in which we were to learn about how to deal with helicopters in the search. We got about half an hour in to it when our team leader received a call from the Volunteer Forces coordinator. There was a need for alpine trained rescuers on Mt. Baldy for a patient evac. Being that 90% of our team is trained for Alpine rescue we responded and drove to the command post at the Mt. Baldy trailhead where we readied our gear. We were about to head up the trail when we heard on the radio that LA's rescue 5 chopper had successfully evac'ed the patient.

We decided to do the second part of our training, Cauhilla Creek Cave, which is near Temecula. This was a fun talus cave that is about a mile hike from the road. We had a reporter and a cameraman with us and I think they enjoyed themselves. It will be interesting to read the article.

At the end of the day we received verification on the possibility that we would be needed for a search for a missing woman in Indio. The call entailed us showing up at the command post in indio at 0630 which required us to leave the Sheriff's Office in San Bernardino at 0500. This meant that I would have to wake up a 0345... joy! So after about 4 short hours of sleep I jumped out of bed and into my car and drove to San Bernardino.

We showed up on time at the CP in Indio and feasted on some egg mcmuffins, yum. After the briefing we were assigned an area to search and we drove out and started searching. We searched for about 4 hours when we were called back to the CP where they said they needed Alpine certified rescuers to find some lost Boy Scouts on San Jacinto. Once our gear was ready and we were about to leave we were notified that the scouts were found and were being pulled of the mountain.

We then ate lunch and continued our search for the missing woman. After a few more hours of looking for her in the hot sun and not finding her we were called back. It was a long weekend and I was tired. I fell asleep as soon as me head hit the pillow.

So I saw a news item about Microsoft releasing their new beta search engine as the main search on MSN (instead of yahoo). When I was checking it out i noticed that in Safari there is no left margin so the text is right up against the left hand side of the window... annoying (if you stretch it out it looks ok). I checked it out in Firefox and it looks fine. In Mac IE you can't even see the search box (on the main MSN page...)! If you post the link to the search in the browser it does work though.